Young, urban, cultural, modern, cosmopolitan – Leiria combines the quality of life of a city outside the major conurbations with contemporaneity and modernity.

The municipality of Leiria stands out for its central location in the country, as it is located in the central region of Portugal. It covers an area of 565.09 square kilometres and is home to about 128,640 inhabitants (preliminary results of the 2021 census), with about 65 per cent of the population being of working age (2020).

It consists of 18 municipalities and is relatively close to Portugal’s main urban centres, Lisbon and Porto, about 1 hour 40 and 2 hours by car respectively. Cities such as Coimbra, Tomar and Santarém are less than an hour away. It is also close to two important seaports for freight transport in Figueira da Foz and Aveiro (about 60 km and 120 km respectively).

Either via the extensive motorway network, which provides easy access to Spain and Central and Northern Europe, or via the international airports of Lisbon and Porto, Leiria’s international access is also extremely convenient.

Portugal’s unique location between the American, European and African continents favours entry into the European Union’s vast free trade area and facilitates business from all regions. Due to its central location in the country and easy accessibility, the Leiria region naturally benefits from these conditions.

The city of Leiria was born and grew between the castle and the river Lis, and the history of human settlement in this area is long. Its medieval foundation dates back to the Christian reconquest movement against the Muslims led by the first Portuguese king, D. Afonso Henriques.

The castle of Leiria is still a monumental symbol of the city’s history. Within its imposing walls, the remains of the different phases of occupation are preserved: from the military fortress to the royal palace.

It was precisely in the dynamics of the territorial conquests to establish the rule of Portugal that the conquering king had the castle built in the first half of the 12th century.

This was definitely the starting point for the intensive settlement of the Leiria region. After the foundation of the castle, the city expanded outside the walls as the population grew, and the elevation to city and bishopric dates back to 1545.

The reign of King D. Dinis (1285-1324) was famous for several works in Leiria that earned him the nickname “farmer” – the sowing of the “Pinhal de Leiria” and the draining of the marshes on the banks of the Lis for agricultural purposes, creating the very fertile valley that stretches from Leiria to its mouth.

The Leiria region is located on the central coast of the country and has a number of natural resources that consolidate the economic dynamism that can still be observed today.

From the time of the Portuguese discoveries (15th/16th century), when the wood of the pine forest of Leiria was crucial for shipbuilding, to the glass industry (18th/20th century) and today’s industrial diversity.

The president is Goncalo Lopes, his deputy is Anabela Fernandes de la Graca.

Detailed information under the link https://www.cm-leiria.pt/municipio/camara-municipal/composicao.

The region around Leiria has an extremely rich cultural and historical heritage and offers a variety of cultural events that take place throughout the year and appeal to a wide range of audiences.

Evidence of this dynamism is, for example, the fact that Leiria has been named a “Creative City of Music” by Unesco in 2019, making it a candidate for the European Capital of Culture 2027.

Leiria is located on the Atlantic Ocean and offers visitors an extensive coastal area with beautiful beaches. Only a few kilometres away are the mountains with their breathtaking landscapes and places, many of which are easily accessible via the existing network of hiking trails. Both are possible all year round thanks to the region’s mild climate and generally pleasant temperatures.

Even today, Leiria Castle is a prominent symbol of the city’s history.

It preserves within its imposing walls the traces of the different phases of occupation, from the former military fortress to the royal palace.

Since the beginnings of human settlement on the Iberian Peninsula, when the most important tools were made of stone, man has been enchanted by these fascinating landscapes between the sea and the mountains!

Many kings and queens have been impressed by the fantastic scenery that can be observed from the top of the hill.

D. Dinis was probably the monarch who stayed most often in Leiria, together with his wife, Queen Santa Isabel, to whom the legend of the Rose Miracle is attributed, this being only one of the many stories that originated in Leiria thanks to these kings.

Several centuries later, the castle, like the town, was repeatedly ravaged by the French occupations and finally almost razed to the ground.

Thanks to the efforts of the Friends of the Castle Association and the famous Swiss architect Ernesto Korrodi, who carried out restoration work, the link between this magnificent building and the people of the city was restored.

In 2021, restoration work was completed on much of the site, not only further enhancing its rich heritage and increasing its tourism potential, but also making the entire site accessible to all citizens by installing two mechanical lifts (on the north and south sides) that can be used free of charge.

Those coming from the city enter Leiria Castle through the Porta de Albacara. Within the very well preserved defensive system, a multitude of sights await the visitor: the Church of Nossa Senhora da Pena, the former royal residence, the Torre de Menagem and not forgetting the magnificent views of the surrounding countryside. The medieval origins of the city date back to 1135, when the fortress was conquered by Afonso Henriques. At that time, the first king of Portugal had a small chapel built in honour of Nossa Senhora da Penha and handed over the fortifications to D. Paio Guterres, the first bailiff of Leiria. Only after the final reconquest by the Christians were the castle walls reinforced by D. Sancho I at the end of the century. In 1324, D. Dinis had the keep built, as an inscription shows; the construction of the royal palace and the church also go back to this king. However, there are also those who claim that these buildings were not erected until the end of the 14th century, when D. João I reigned. What is certain is that D. Manuel commissioned other work in the 16th century, namely the construction of a sacristy in the church. At the beginning of the 20th century, Ernesto Korrodi and the Friends of the Castle Association, whose work had a decisive impact on the townscape, carried out extensive remodelling work. The castle thus regained its importance in the history of the town, although no longer in its original function as a fortification. Korrodi, a later follower of Romanticism, endeavoured to revive the medieval character and succeeded in restoring the building to the splendour it had radiated for centuries before it was abandoned to decay. Today, the site is ideal for leisurely walks within its walls, and the castle, perched high above Leiria on a hill, has become the city’s landmark.

The Cathedral of Leiria

Built in 1559, Leiria Cathedral is a magnificent and simple building in the Mannerist style and is considered, along with the Alcobaça Monastery and the Jerónimos Monastery in Lisbon, to be one of the most perfect examples of parish church architecture. One of the most interesting aspects of Leiria Cathedral is its depiction of the role of women in the Gospels, as on the main altar is the Coronation of the Virgin Mary. Legend has it that there was a bell tower in Leiria Cathedral, but the residents on the other side of the city could not hear their bells ringing. So in 1770, Bishop D. Miguel Bulhões e Sousa had another bell tower built on the castle hill, separate from the cathedral. The locals say that “Leiria has a tower without a cathedral and a cathedral without a tower”. It is the only cathedral in Portugal without an integrated bell tower. The terrible earthquake of 1775, which also shook Lisbon, severely damaged the main façade of the cathedral, so reconstruction began the following year. Leiria Cathedral is a fine example of the values of humanism and the influence of the Renaissance.

The Museum of Leiria is an open window to the memory of an area that has been inhabited for a long time, with a new look at a complex reality at the beginning of the 21st century.

The idea, born during the liberal monarchy, owes its concretisation to the persistent efforts of Tito Larcher (1865-1932), which took shape with the creation of the Regional Museum of Works of Art, Archaeology and Numismatics of Leiria in 1917.

In 2006, work began on bringing back the Santo Agostinho Monastery, a monument dating from 1577 (church) and 1579 (monastery complex), which now houses the new Leiria Museum, into the cityscape.

The museum’s property includes the municipal art collections and the archaeological area, which is divided into two spaces.

In terms of a holistic view of the country’s history, the long-term exhibitions offer a path through a rich and dense forest of objects, events and myths that define a central identity of the country.

In the second room there are temporary exhibitions that allow for a more in-depth exploration of specific themes and collections.

Since its reopening to the public, the Leiria Museum has gained recognition both nationally and internationally and has received several awards.

To experience all that the municipality of Leiria has to offer, visit https://www.visiteleiria.pt/. 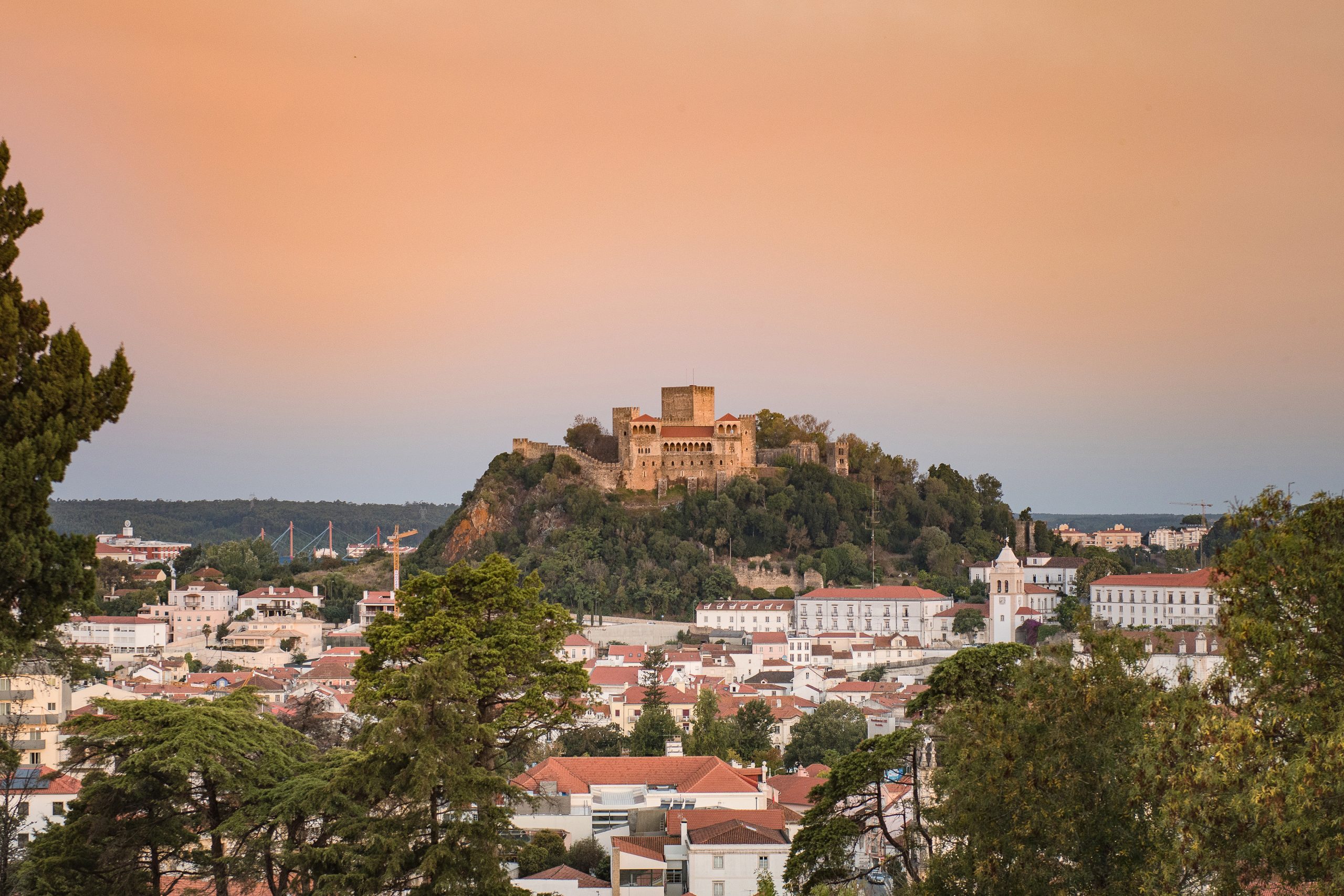 The economic activity of the Leiria region has aspects that distinguish it from other national areas and that reinforce its advantage as an investment location.

The municipality of Leiria accounts for around 50 per cent of businesses in the region, with manufacturing leading the way in terms of the number of people employed (2019).

It is a sector that contributes strongly to the regional GDP, with around 43 per cent of the economic activity of these companies located in the 34 current industrial estates of the municipality of Leiria. The competitive advantage lies in the region’s strong entrepreneurial culture, which combines innovation with industrial tradition, the availability of skilled labour and good connectivity to external markets.

In international trade, about 80 per cent of the country’s exports come from trade within the EU and the remaining 20 per cent from trade outside the EU.

In this sense, the municipality is committed to monitoring and promoting the development of the industrial sector, including ICT, by offering structurally flexible and technologically equipped spaces to foster innovation in the region’s industrial ecosystem.

The Estádio Dr. Magalhães Pessoa is a stadium of the first division football club União Leiria. It hosted two group matches at the 2004 European Football Championship. The stadium has a capacity of 30,000 spectators and was officially opened on 19 November 2003 by the Portugal vs Kuwait match (8-0). Built by architect Tomás Taveira, the stadium is owned by Leiria City Council. Expanded from 11,000 to 30,000 seats, the stadium is part of the municipal sports centre.